Sega Saturn Shinrei Jusatsushi Taroumaru is literally one of the craziest games I’ve ever played.

I’ve been a gamer for a long time. I’m 32 as the writing of this post and I’ve been at least gaming since I was probably around 8 and maybe even before that.

Always at least trying some of the latest games I could get a hold of that seemed interesting. I for one thought I had seen it all before I sat down during my stream over on https://twitch.tv.com/thesmango

If you enjoy Retro games as much as I do why don’t you join my discord so we can chat!

This game was only released in Japan back in 1997. A crazy game that uses an auto-targeting system in the action game genre. You can choose from 2 different characters. Both use psyhic powers to destroy all the enemies on stage.

The overall feeling of the game feels very much like a classic arcade game that you could’ve played back in the day. Shinrei Jusatsushi Taroumaru also can bring a hefty price tag for Sega Saturn collectors. There are said to only be around 7,000 copies of the game. Since the game has had no re-releases on anything and only playable on a Japanese Sega Saturn and turns out is a pretty fun game. It’s no wonder you could possibly hurt your wallet picking up this game.

Another name this game goes by for Americans is Psychic Killer Taromaru. 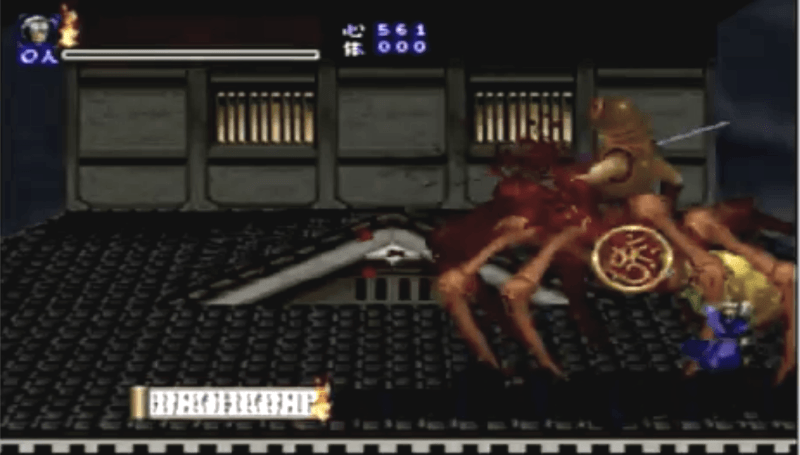 You can play this game on an American Sega Saturn though below I’ll link what you will need to play the game.

The useless A button

Trying to figure out what all the buttons did without being able to read Japanese didn’t really take too long. B is your main attack, C Jumped and dashed while holding down. But, the A button from what I could tell done utterly nothing. It looks like the same attack as pressing the B button but does nothing to enemies. After some research apparently, the A button is supposed to mind control some enemies or put them under a spell to help you. It was UTTERLY useless and it seems like it never works from what I’ve read anyways. So just stick to mashing that B button and charging it to progress through the game!

If you are looking for some ways to play this game you have a few options. The 1st option is to do it all legit. Get a cool white Japanese Sega Saturn then buy the game for tons of money off of eBay then you are all set.

Few other options you have are modding your Sega Saturn and downloading the game off the internet somewhere and playing a burnt copy. Actually, you don’t even have to burn games anymore if you are lucky enough to get the SDcard reader CD-Replacement for the Saturn. You can also try your luck at Emulators and seeing if you can get them to work properly.

You might also need to pick up a handy dandy Action Replay so you can play import games with ease.

The Sega Saturn has some hidden gems on the system and Shinrei Jusatsushi Taroumaru is clearly one of them. It was an absolute blast playing this game for the first time on live stream.

Oh, yea you should check out the retro streams sometime!

You cannot go wrong spending some time with this game. It’s got amazing 2.5D graphics and gameplay and it just plain nuts.

Name another game you end up in a frog stomach?

I hope you guys are enjoying the retro gaming content as much as I do making it!