This is part 2 of the Final Fantasy Series, the Fantasy that never ended. 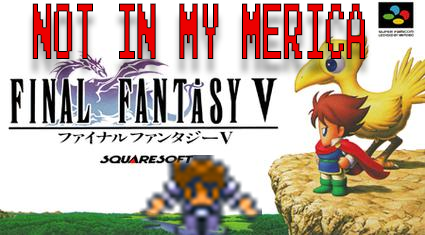 Hey, look its the other Final Fantasy that was released for the Super Famicom that didn’t make it over to the United States on true release! Final Fantasy V released December 6, 1992, in Japan.

Too bad no one in America even knew it existed at this point we had only gotten 2 Final Fantasies. Final Fantasy 1 on the NES and Final Fantasy II(original IV) for the Super Nintendo. I was pretty young at the time I might’ve been 6 and had never heard a whisper about another Final Fantasy from my older gaming cousins. It wasn’t until we actually got dial-up and eventually a computer that I had learned there were UNRELEASED Final Fantasies in North America.

Learning about Final Fantasy V and that the Final Fantasy Series had more than 3 entries were absolutely amazing to me! I couldn’t believe there was a SNES Final Fantasy that I hadn’t played I think this had to be somewhere around the year 1998 or close to that whenever the internet had the boom. Emulation was huge even then. The only bad part was fan translations of the game really wasn’t there or that great.

Being lucky and getting the correct translation patch at this age and the correct files would’ve been nice but I don’t think I ever came across them. I did get to play it but I believe most of it was in Japanese so I didn’t know peoples names or anything. I learned that there were jobs which kinda tailored back to Final Fantasy I on the NES, but more specifically at this time, I had played Final Fantasy Tactics which had a job system. So it was awesome thinking I could change into a ninja anytime in the game. 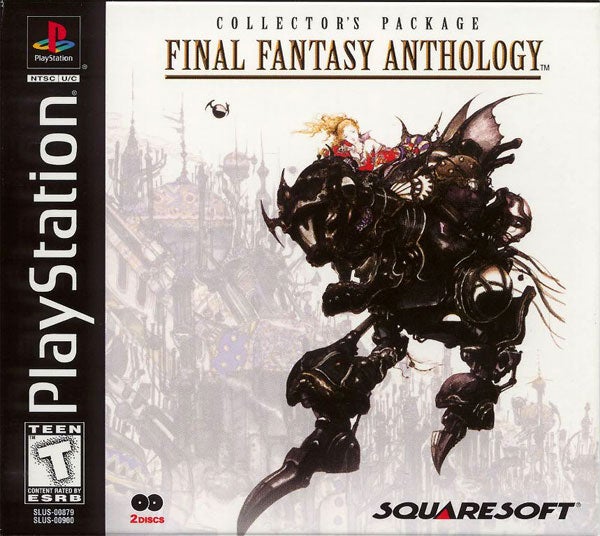 Final Fantasy Anthology dropped which finally which helped fix the Final Fantasy Series numbers. I believe this was the last one they released which had officially made all Final Fantasies available in the good ole United States of America now. This had Final Fantasy V, alongside with Final Fantasy VI(FFIII SNES) and had finally written the wrongs.

I forget whenever I actually acquired Final Fantasy Anthology but the thoughts of having my favorite Final Fantasy alongside one I had never had much experience with but with bad ROM patches seemed amazing for the PS1.

Playing through a bit of Final Fantasy 5 it thought it was a great addition to the Final Fantasy Series. The amount of time you could put into building your parties skills and classes was amazing.

Although, I didn’t fall in love with any of the characters like I did in Final Fantasy IV or VI. Perhaps, it was due to the fact that I didn’t get to play the game at the appropriate time either. The overall music score in the game wasn’t anything to write home about but it had some great tunes. It wasn’t the masterpiece that some of the games in the series presented.

I’m sad to say I didn’t ever finish Final Fantasy 5 as the day of this writing, but someday I will try to complete it. 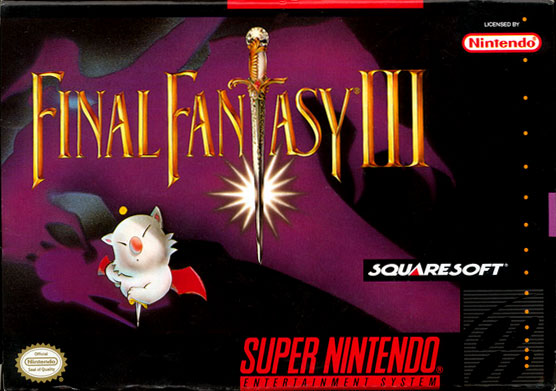 If you haven’t read the article that I wrote about Kefka and Sephiroth then you’ve missed out on a great piece I wrote whenever the site first went up. Kefka is insane, and a great bad guy.

Kefka basically ends the world as you know it separating your whole party and murders people by poisoning the water at one point. Kefka is one who is easy to hate and the clear bad guy almost from the beginning of the game.

Tons of characters and story

The game from a technical standpoint doesn’t have just one true protagonist. The story, however, is kind of revolved around Terra or the girl born with magic. So, If I was wanting to point out the main character it would be her.

14! That is by far the most still today!

You can finish the game with any number of character you want, there are secret steps to get some of them and at even certain points in the game!

Rumors before the internet

There was always talk about big video games at school. Now, most of my friends in grade school didn’t play Final Fantasy but my older cousin who was in high school heard all kinds of crazy tells. The biggest one, even according to the internet now was that you could resurrect General Leo and play him as a playable character.

General Le,o you get to play him for a few minutes at one point in the game until Kefka slays him. You find his grave and everything it is clear he is dead.

The rumor was that you could resurrect him by using this strange cave whom you could get Realm from. This turned out to be completely false and made up from who knows who but, boy was it a good rumor as I spent many, many hours trying to figure it out. I forgot where I read about it but several people fell for the same thing.

I believe as well as many other do that Final Fantasy VI is one of the best if not the best entry in the Final Fantasy series. It has a tremendous soundtrack one of the best, tons of characters, and an awesome story. The graphics for the 16-bit era are fantastic, all the sprites are sharp. The characters you can see the emotion, even the battle system got a great upgrade and made it active> Meaning you couldn’t sit let it set there and never pick a move. In my mind, there hasn’t been another game that can come close to capturing this fantastic entry in the series. 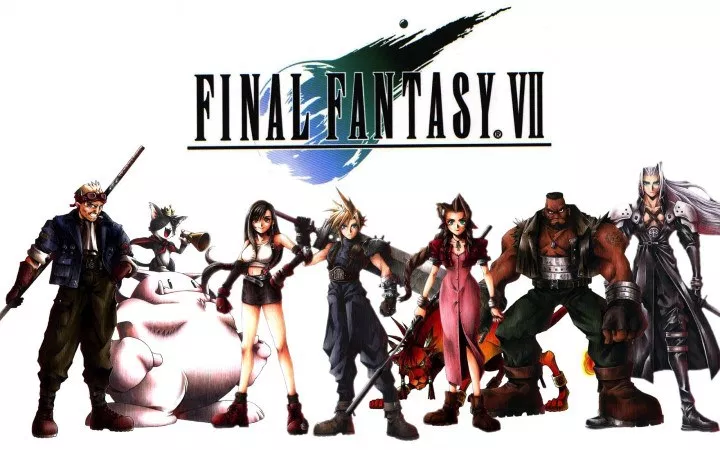 What to first say about Final Fantasy VII…

Final Fantasy VII is the Final Fantasy Series most overrated game. I don’t mean that is a bad game at all, it is a fantastic game matter of fact. But holy cow did this game blow up and become a hot steaming mess of movies and spin-offs. With that being said and out of the way. We can now move forward on what makes this game fantastic and share my experience with the game.

Playing games on a CD was something new for quite some time. We didn’t get a PS1 in the household until about when Final Fantasy VII was released. I believe we might have had the computer so we were probably playing some sort of games on it but most of the games I remember didn’t come out until 1998. Whenever I found out Final Fantasy VII was 3 DISCS LONG I was super excited. Growing up in below average home we didn’t have much money to spend on entertainment like video games.

We always looked for games that would last, and 3 discs long were right up our ally.

Amazing FMVs that blew our minds and graphics

Now I know today in 2018 some of this stuff doesn’t hold up. At the time this was literally what some considered best of the best. The cutscene when weapon in my mind sticks out for whatever reason. It was awesome to see a gigantic monster on screen and no one had really done “FMVs” at this time. Nowadays in-game graphics look better than this now but back then, if a game looked like this it would’ve blown my mind even more.

The pre-rendered backgrounds in Final Fantasy VII doesn’t hold up at all today. It is the thing that sticks out the most today but you got to think Final Fantasy VII wasn’t developed to be played in full HD 1080P+ monitors and TVs.

Taking a page right of the and building upon the Final Fantasy VI book. Materia took another step in the right direction. Instead of equipping Espers (Summons) like you did in FFVI. Now you could equip materia straight into your weapons. Which granted Skill bonuses, and allowed you to use magic or even summons.

Leveling up a Materia to the max made it extremely powerful and you always wanted to have it equipped to take down some bosses.

Storytime for sure. I had an older cousin and he had printed off secrets off the internet from high school and wouldn’t share his awesome Golden Chocobo secrets. We finally discovered the secrets in his room and figured out how to breed a golden Chocobo. The Golden Chocobo unlocked a secret summon that was only accessed by traveling the water to a secret place. Knights of the Round. 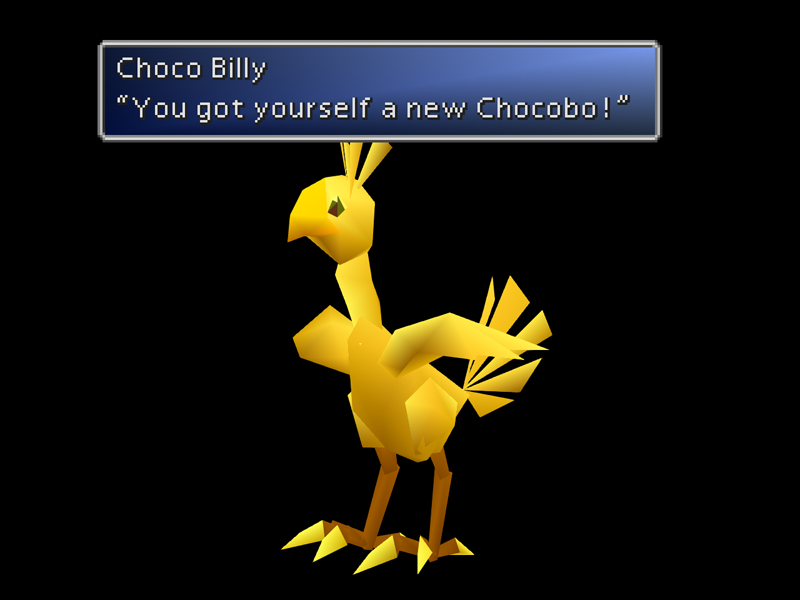 Man, this thing was hard to even get it took days maybe even weeks for my child like brain to figure it out. Eventually discovering this awesome Chocobo and the Summon I could finally beat the game.

There were tons of more awesome secrets that I later discovered about the game but that came way later growing up.

Final Fantasy VII was some peoples first entry into the Final Fantasy Series. It almost became POP culture at one point as I said above making movies and spin-off games.

FF7 had great characters, a great story, and fun gameplay and is a well-deserved entry into the series. It is worth playing today especially with a few HD mods you can even pick it up on steam.

With the remake coming out soon which will probably ruin the traditional gameplay of FF7 as it’s not even going to be turn-based the original game is still considered the best by most.

While I don’t consider it the best Final Fantasy it is a great addition! I highly recommend anyone wanting to try it give it a try.

Continue along with the fantasy that never ended

Till next time be sure to follow me on twitter @realkynerd where I am always retweeting and commenting daily and be sure to check me out on twitch mostly on Friday nights!

2 thoughts on “The Fantasy that never ended. A look into the Final Fantasy Series Part 2”